Check out these six great outboard-powered bowriders that start at $27,000.

When Carl Moesly designed the Sea Craft 19 — the world’s first fiberglass bowrider in 1965 — he powered it with a sterndrive. When other builders followed suit on the open-bow concept, they did too. When most people think of the family runabout, they think of sterndrive propulsion.

However, in the very first brochure for the Sea Craft 19, Moesly included in the options list: “Available as an attractive outboard with huge, deep cockpit and hinged Burma teak panel on motorwell for safety and soundproofing.” With that, Moesly provided an alternative for those who liked the outboard’s simplicity, 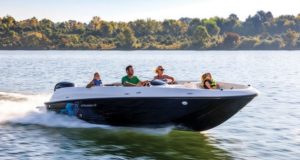 ease of maintenance and ability to tilt clear of the water. He also perfectly summed up the perceived pros and cons between the two power choices. The outboard freed up more cockpit space, but the sterndrive was quieter and (at that time anyway) more powerful. Still, for the most part of the next few decades, sterndrives became the definitive power choice for the style.

On Outboards
Here are some of the pros and cons for using outboard power on a bowrider.

Pros:
* Frees up cockpit space inside the boat.
* In most cases, outboards deliver superior power-to-weight ratios over sterndrives.
* Can be tilted completely out of the water to prevent corrosion.
* Ease of maintenance and repowering down the road.
* Allows for more interior stowage.

Cons:
* Sacrifices crispness in turns, particularly in close-quarters maneuvering, compared to sterndrives with dual props.
* Can be more expensive.
* Outboard boats require swim steps rather than a full-beam swim platform.
* Aesthetically less pleasing to the eye for some boaters.