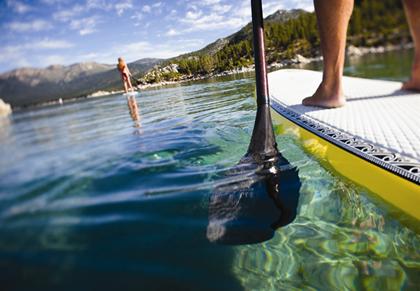 Lake Tahoe – North America’s largest and most popular alpine lake, a place Mark Twain once called “the fairest picture the whole earth affords” – is the champion in USA TODAY’s survey. The poll generated  more than 5,000 votes via Facebook and Twitter.

Lake Tahoe, voted the best lake in America by USA TODAY readers, straddles the border of California and Nevada. Caption by Jeff Dow.

While we took some heat for ignoring the five Great Lakes, our intention was to spotlight some of the USA’s smaller, less famous summer getaways.

So much for that idea:  The winner, notes nominator Peter Fish of Sunset, straddles the California-Nevada border and “draws a gazillion – that’s what it feels like on a weekend, anyway— tourists who use it as a summer escape hatch.”

But, Fish adds, Tahoe is “too stunning not to be experienced” – a sentiment echoed by aficionados  like Dick Goodrick, a former Michigander who now lives in Dayton, Nev.